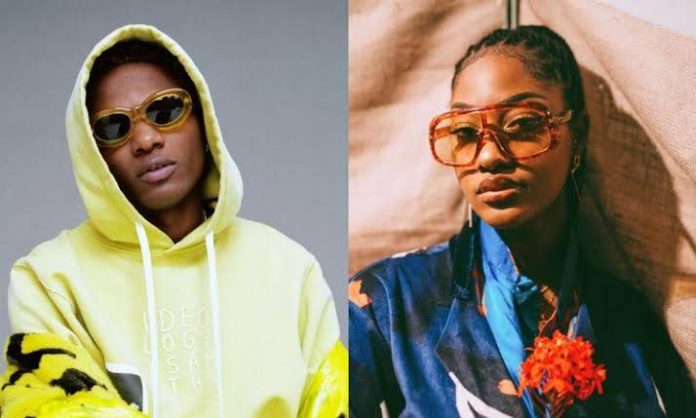 Nigerian music sensation, Wizkid who recently had one of his songs, ‘Essence’, become the most shazamed song in the US has opened up on why he chose to feature Tems, a young Nigerian female artist.

The music super star disclosed that he tapped Tems for ‘Essence’, because he loves connecting with new artistes.

Ever since the song was released, it received massive acceptance across the globe. Prominent entertainers all over the world have been recorded dancing to its rhythm.

Wizkid who was featured in GQ Magazine spoke on why he collaborated with “a rising star” for the chart-topping song.

He said:“You know, I’ve known Tems…I can’t even actually remember how we met, but I know I brought her out for one of my shows in Lagos. We had talked about working and I went back home to record,” the singer replied.

“When I record at home, it’s like I have a crazy situation. I’ll be in a room with like 8, 10 producers, everyone’s got their rooms and we’re just making music. She came through to the hotel and we laid down the idea.

“It was just effortless. Just lay down the melodies, and she didn’t even think anything of it. She felt like we had to do another record, but I already knew we had magic.

“I love meeting new artistes. When I’m in a room with a new artiste, it feels like, Oh, my God. It feels like I’m right there when the magic is just about to take off and take form. It’s so exciting to me.

‘Essence’ became the first Nigerian and African song to crack the Billboard Hot 100 in July.

In August the record-breaking track, hit 59th place on the Hot 100.

On Wednesday, ‘Essence’ had risen to 16th place from 44 on week 6, after spending two months on the chart.

Big Brother Naija 'shine ya eye' exhousemate, Boma Akpore has narrated how an ankle injury led to the end of his career in football...