Home Security Days Of Rivalry Between Security Agencies Are Over – CIS, Kano State 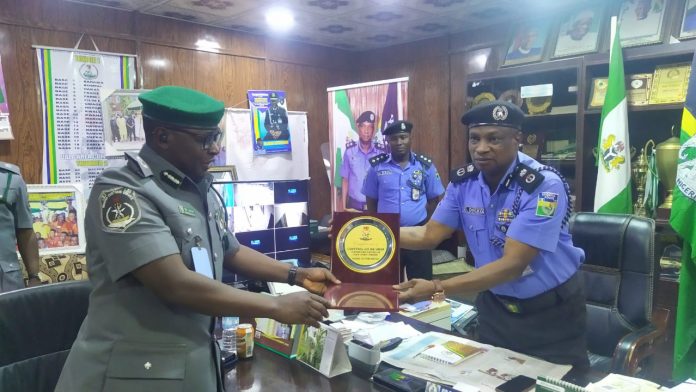 The Comptroller of Immigration Service, Kano State Command, CIS Muazu Abdulrazaq, has assured the people of the State that rivalry between sister security agencies has become a thing of the past.

The newly appointed CIS, Kano State, gave the assurances when he paid a familiarization visit to the Commissioner of Police in the State, CP Sama’ila Dikko yesterday, 17 March, at the Command’s headquarters, Bompai, Kano.

TheFact Nigeria notes that although the Nigeria Police are the head agency saddled with the statutory task of maintaining internal law and order for the protection of life and property of the citizenry, other security agencies have been established to complement this daunting task. However, it does appear that rather than being an asset, the security agencies in Nigeria have become liabilities. This stems from the fact that the assigned overlapping roles and duplicated duties invariably eventuate into pervasive acrimonious rivalries. As a result, it seems as little or nothing has been, it is being done to combat crime and tackle insurgency in the country.

Abdulrazaq stressed the importance of recognizing that all security agencies were together one family, and that “we are extracted from the Police and we can not do without the Police”.

“We are at the Police Command’s Headquarters to seek your continuous support and cooperation. Days of rivalry amongst security agencies are over. We need each other to achieve our goals”, Abdulrazaq said.

In his response, CP Dikko, while expressing delight at receiving the newly posted Immigration Official, averred that the Police and Immigration Service have continuously maintained a cordial relationship, adding that they are working excellently with sister agencies, which resulted in the relative peace enjoyed in the State.

He assured continuous partnership with the Immigration Service, “both formally and informally to ensure a safer and more secured Kano State”.

Similarly, the newly posted Area Controller in charge of Kano/Jigawa Area Command of the Nigeria Customs Service, NCS, paid a courtesy call to the Kano State Police Commissioner, where he expressed his pleasure and honor to be at the Police Command.

He stated that the purpose of the visit was to invigorate the already existing cordial relationship between the Police and Customs, who share a common goal of maintaining law and order, adding that “we are one family and we will continue to synergize for effective service delivery.”