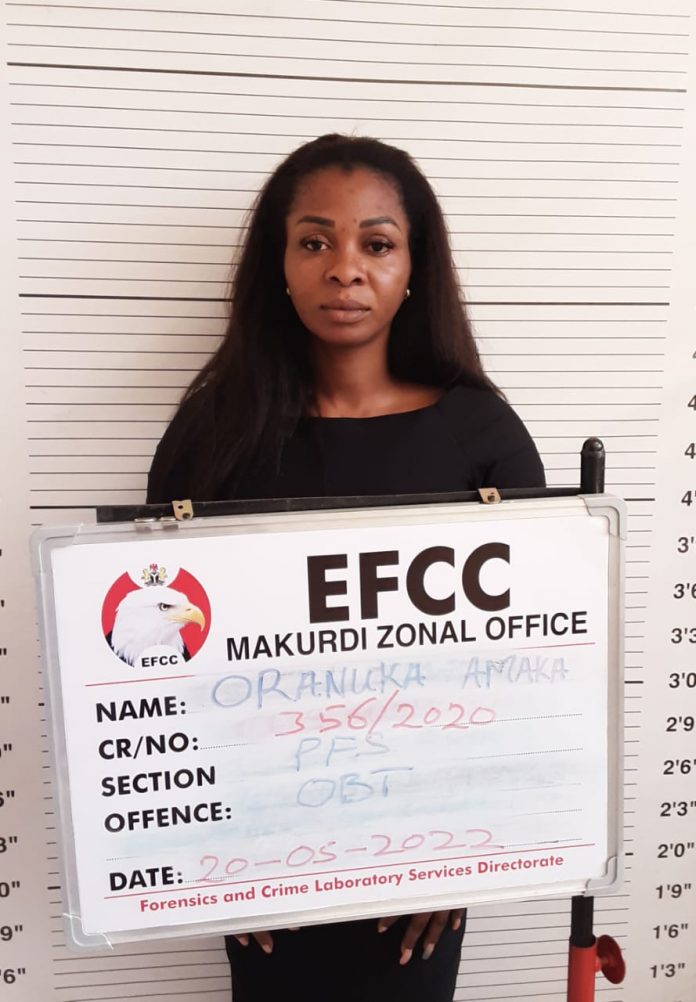 The Makurdi Zonal Command of the Economic and Financial Crimes Commission, EFCC, has arraigned one Amaka Oranuka for obtaining under false pretenses the sum of N10, 347, 000.00.

TheFact Nigeria learns that Oranuka allegedly offered to sell two IX25 Hyundai SUV cars, worth N15,000,000.00 to the petitioner, Akor John, who claimed that he made a total deposit of N12,293,000.000 in instalments into her Zenith Bank account with number 2084940980. After the payments, however, no such cars were delivered to him and all efforts to recover his money proved abortive.

The offence is contrary to Section 1(1)(a) of the Advance Fee Fraud and Other Fraud Related Offences Act, 2006 and punishable under Section 1(3) of the same Act.”

Count Two reads: “That you, Amaka Oranuka, on or about the 27th day of May, 2019, at Gboko, within the jurisdiction of this Honourable Court, did by false pretences and with intent to defraud, obtained from one Akor John, the sum of One Million, Nine Hundred and Forty Seven Thousand Naira (N1,947,000.00) only, by cash, under the pretext of supplying him two (2) IX25 SUV Jeeps, which you knew is false and you thereby committed an offence contrary to Section 1(1)(a) of the Advance Fee Fraud and other Fraud related offences Act, 2006 and punishable under Section 1(3) of the same Act.”

She pleaded “not guilty” when the charges were read to her.

Prosecuting counsel, M. Yusuf, thereafter, prayed the court for a date for commencement of trial and that the defendant be remanded in the Correctional Centre.

However, defence counsel, M. O. Uzor, moved an application for the bail of the defendant, urging the Court to grant the defendant bail on most liberal terms.

Justice Dogo thereafter granted Oranuka bail in the sum of N5million with two sureties in like sum, whom must be on grade level 12 and have a landed property in Makurdi. Also the sureties must submit two- recent passport photographs and valid means of identification to the court. They must also swear to an affidavit of means and their residential addresses, as well as original copies of their letters of first appointment be deposited with the Registrar of the court.

The judge adjourned the matter till September 22, 2022 for hearing, and remanded the defendant in a Correctional Centre pending the perfection of her bail conditions.