The All Progressives Congress, (APC), has released the timetable of activities for the conduct of legislative by-election into Isoko North State Constituency of Delta State.

Information obtained from its official Twitter handle, @OfficialAPCNg, quoted the party as saying that this was according to the guidelines issued by the Independent Electoral Commission, (INEC), @OfficialAPCNg wrote: “In accordance with the provisions of the Electoral Act 2010 (as amended) and @inecnigeria, guidelines, we hereby release this time-table and schedule of activities for the conduct of Legislative By-Election into Isoko North State Constituency of Delta State. 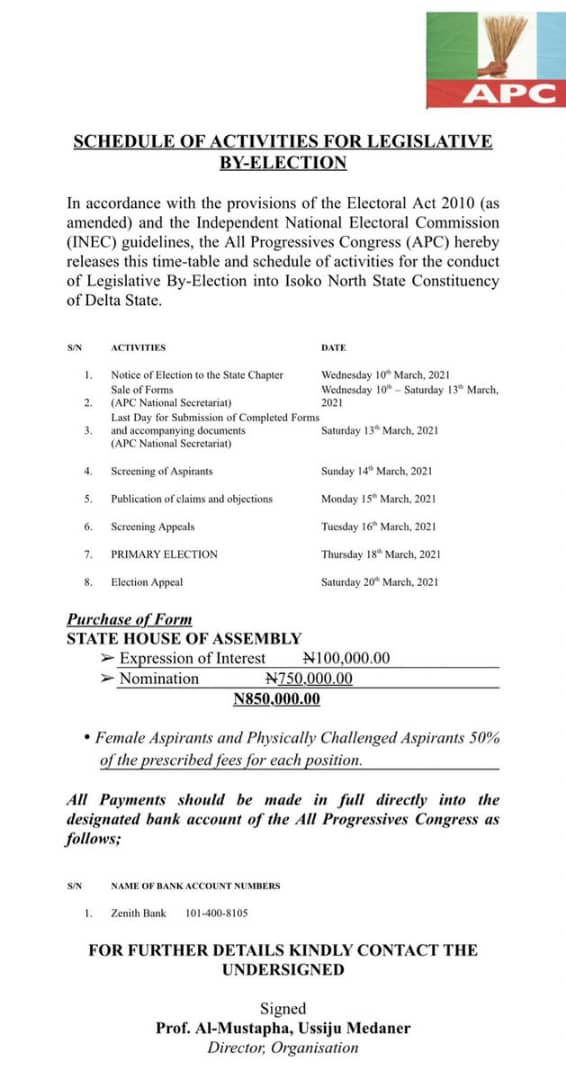 Mr. Festus Okoye, the INEC National Commissioner in charge of Voter Education and Information, on Wednesday, said that the vacancy arose as a result of the death of the member representing Isoko North State Constituency of Delta State in the House of Assembly,  Hon. Tim Kome Owhefere.

The Delta State House of Assembly  subsequently declared as vacant, the seat for the state constituency.

Okoye said that INEC has fixed Saturday, April 10, 2021, for the conduct of the bye-election to fill the vacant seat for the Isoko North State Constituency of Delta State.