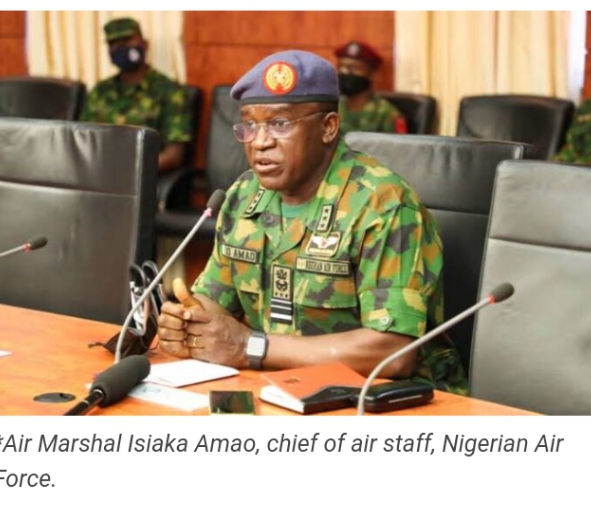 The Chief of the Air Staff, CAS, Air Marshal Oladayo Amao has said that appointment of officers to head command posts in the Nigerian Air Force NAF is to be based strictly on seniority and hierarchy.

In a statement released by the Force’s Director of Public Relations and Information, Air Commodore Edward Gabkwet, the CAS stated this on Friday, 26th March, on the occasion of his maiden tour of the NAF Tactical Air Command TAC, Makurdi.

The CAS stressed that gone were the days when subordinate officers are given command appointments ahead of their seniors, a situation he said “does not augur well for the system”  as it breeds insubordination and indiscipline.

With regards to incidences of Indiscipline, the CAS stated categorically that, “there will be no sacred cows … as those found wanting will be punished as ascribed in the Armed Forces Act.”

Amao also reminded the personnel of the imminent arrival of some platforms to Makurdi,  purchased for NAF to enhance efficiency and effectiveness in service delivery.

The CAS further enjoined the personnel to support the 131 Engineering Group, which is the hub of some of the platforms, and to  make the foreign technicians feel at home.

According to Amao, the platforms, when they become fully operational, would be deployed immediately to the theatres of operations and should hopefully be the game changers in all DHQ-led operations nationwide.

The CAS also assured that with the full backing of President Muhammadu Buhari, efforts were currently underway to improve the combat efficiency of the NAF and other services to an appreciable level, and therefore, enjoined NAF personnel to continue to support the Federal Government in its efforts to equip NAF and other services.

Furthermore, Amao assured that special considerations for promotions will be given to NAF personnel as soon as they meet the set criteria for promotions by attending and completing courses in the Force that should enable thier upgrading.

On NAF’s Post Service Housing Schemes, Amao expressed dismay over personnel being compelled and put under pressure to meet up with initial deposits for the houses, noting that, ”Housing schemes by NAF should be easily affordable and stress-free”.

Consequently, he immediately directed the Chief of Administration to work out payment modalities in such a way that deductions for houses are made from monthly salaries, rather than lump sums that usually exert undue financial pressure on personnel.

”These practices have proven to be effective and efficient in other developing countries and I see no reason why we can’t try it here,” Amao said.

According to the statement also, the CAS disclosed NAF’s agreement with other sister services to henceforth subordinate themselves to the Defence Headquarters DHQ, under the leadership of the Chief of Defence Staff CDS, Gen. Lucky Irabor, noting that just as it is obtainable in military organisations worldwide, the DHQ was responsible for the command and control of the entire Armed Forces of Nigeria AFN.

This also means, Amao said, that all ongoing joint operations and Joint Task Forces would be directly subordinated to the DHQ, and their commanders report directly to the CDS, adding that this was the new line the service chiefs had greed to  with regards to ongoing efforts to bring to an end the various security challenges facing the country.

”When we say we are members of the AFN, we mean all the three services represented as a single entity.

“When we accept the fact that we, the members of the AFN constitute a united entity, the issue of rivalry will not arise,” he said.