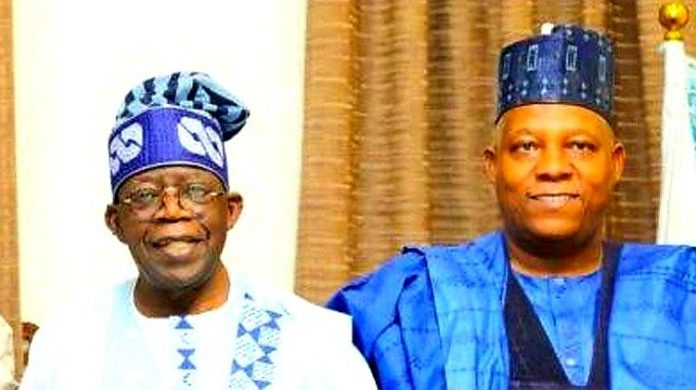 Millions of Christian Faithful in Nigeria have been reacting to the All Progressive Congress (APC) announcement of the Muslim-Muslim Presidential ticket for the forthcoming 2023 general elections.

Recall, the national leader of the party, Asiwaju Ahmed Tinubu announced the former governor of Borno State, Senator Kashim Shettima as his running mate on Sunday when he paid president Mohammed Buhari a visit in Daura, Katsina State.

The announcement has sparked reactions amongst Christian faithful who believed that the action was part of the alleged plan to islamise the country.

Even the literate ones refused to accept the fact that the appointment was based on competence, arguing that there are Christian Northerners who are qualified and competent to act in that capacity.

@renoomokri: “During the APC Primaries, Tinubu DENIED he would have a Muslim-Muslim ticket. He tricked delegates. He said “it has no basis whatsoever”. They voted for him expecting a balanced ticket. Read his official statement yourself. Can Nigerians trust a man like this?

@ochuksk: “It shows the level of his disrespect for other religions while claiming marriage to a christian. Religious intolerance is a crime against humanity”.

Meanwhile, Tinubu explained that senator Kashim Shettima was a strong party member, whose knowledge on governance could be harnessed for the interest of the nation.

Asiwaju also made it clear that his selection of Shettima was with a sense of pride that the decision was not based on religion or to please one community over the other but as someone who he believes could work for the betterment of the country and ensuring the party’s victory in the presidential election comes 2023.

He also reinstated that his selection was after due consultation with party members and leaders across the country, therefore, urged nigerians to embrace his decision not minding the religious beliefs of Shettima.

Senator Kashim Shettima’s career in politics and beyond shows that he is eminently qualifed for the position of the vice president.

Is Digital Tourism a possibility in the Post Covid Nigeria?