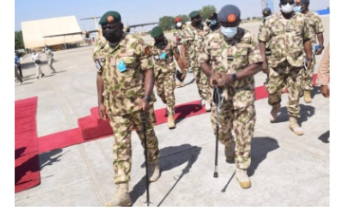 The Chief of the Air Staff (CAS), Air Vice Marshal (AVM) Oladayo Amao, disclosed this even as he charged the Air Task Force (ATF) of Operation LAFIYA DOLE (OPLD), working in synergy with sister Services and other security agencies, to sustain the onslaught against Boko Haram Terrorists (BHTs) and Islamic State of West Africa Province (ISWAP) elements in the North East of the country, in order to ensure total defeat of the terrorists.

Amao, in a statement by the Director of Public Relations and Information (DOPRI), Air Vice Marshal Ibikunle Daramola, gave this charge on Monday, while addressing personnel during his maiden operational visit to the ATF Headquarters in Maiduguri and the 171 Nigerian Air Force Detachment (171 NAF Det) in Monguno to assess the conduct of the Counter-Insurgency Operation as well as inspect facilities and ongoing projects.

The CAS, who arrived Maiduguri from Abuja in company of his counterpart, the Chief of Army Staff, Major General Ibrahim Attahiru, commended the ATF for the recent successes recorded in the renewed offensive by the Land and Air Components of OPLD, and stated that the NAF Headquarters would continue to provide all necessary support to ensure “the sustenance of critical airpower capabilities required for joint force employment in pursuit of national security imperatives”. 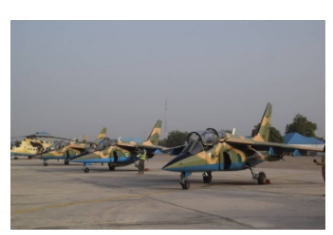 In his address, The CAS, who had earlier been updated on the conduct of the ATF’s operations by the Commander ATF OPLD, Air Commodore Abubakar Abdulkadir, conveyed the appreciation of the Commander-in-Chief of the Armed Forces (C-in-C), President Muhammadu Buhari, as well as the Minister of Defence (HMOD), Major General Bashir Magashi (retired), to the personnel for their relentless efforts in the fight against insurgency. He equally thanked the personnel for the prayers and congratulatory messages that followed his appointment as CAS.

While expressing appreciation to the C-in-C for considering him worthy of the appointment, AVM Amao also highlighted that, while the C-in-C commended the armed forces personnel operating in the North East Theatre for their efforts, the C-in-C, and indeed the HMOD, had stated emphatically that much more needed to be done.

He emphasized the onerous task given to the Service Chiefs by the President, of bringing the war against insurgency to a decisive end in order to restore normalcy to all troubled parts of the Country, and disclosed that they had already begun to take action in this regard, holding several meetings to evolve strategies for better synergy in the joint operations. The CAS therefore charged all personnel to do their own bit towards the attainment of this noble objective.

Speaking further, AVM Amao shared his vision: “to enhance and sustain critical airpower capabilities required for joint force employment in pursuit of national security imperatives”, which he said he had crafted in line with the C-in-C’s mandate as well as the HMOD’s strategic guidance.

This vision, he further disclosed,  is hinged on 5 Key Drivers: focus on doctrinal development and application of airpower in Joint military operations; pursuit of purposeful training and human capacity development; sustenance of platforms and equipment serviceability through innovative maintenance methods and logistics support systems. Others are: fostering a disciplined workforce essential for combat readiness, and, bolstering morale by improving personnel welfare.

AVM Amao further emphasized that the focus on joint doctrinal development was premised on the fact that new ways of doing things needed to be evolved in order to achieve better, longer-lasting results, adding that in terms of pursuing purposeful training and human capacity development, the Service would sustain and build on the capacity building initiatives of his predecessor, while ensuring that training is robust and balanced with regard to quality and quantity. He also stressed that in sustaining  serviceability of platforms, the Service would continue to leverage on the acquisition of new platforms, whilst ensuring effective maintenance of existing ones.

In this regard, the CAS went on, “in addition to the 23 brand new aircrafts already acquired for the Service by the Federal Government,15 additional new manned aircrafts (12 A-29 Super Tucano attack aircrafts and 3 JF-17 Thunder multi-role fighter jets) as well as 8 new Unmanned Combat Aerial Vehicles (UCAVs) were also being expected. He noted that these additional new aircraft would undoubtedly add considerable value to operations within the North East and other Operational Theatres.”

Regarding welfare, AVM Amao disclosed that, in line with the C-in-C’s mandate to ensure adequate welfare for all personnel, his Administration would give priority attention to the welfare needs of personnel, especially in the areas of provision of equipment, uniforms and kits. He also added prompt payment of appropriate allowances as well as provision of residential accommodation, while in Service, and post-Service housing, for those preparing for retirement, to the list.

In Munguno, the CAS was received by the Commander Sector 3 OPLD/Multi-National Joint Task Force (MNJTF), Major General Sunday Igbinomwahia, along with his Commanders and Principal Staff Officers (PSOs), before proceeding to HQ 171 NAF Det, where he was briefed on the activities of the Unit by its Commander, Squadron Leader Mohammed Halilu.

As in Maiduguri, the CAS also commended the personnel for their crucial contributions in the fight against insurgency, urging them to sustain the high level of professionalism in the performance of their duties. 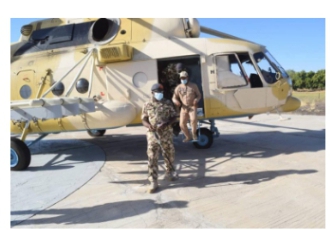