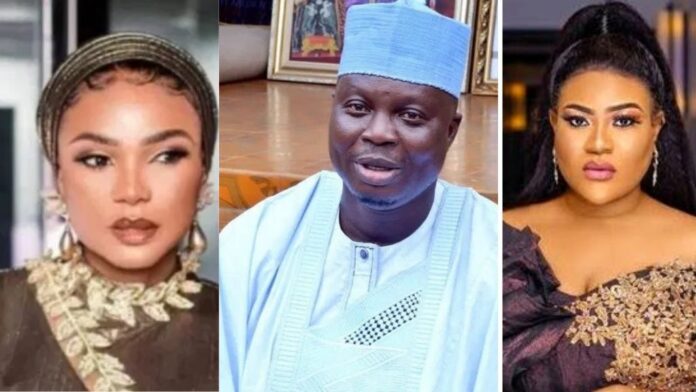 The organization accused the actresses of “reckless accusations, abuses and embarrassment of our sector”.

However, their decision was criticized by Nkechi Blessing and some other celebrities but Iyabo Ojo on Thursday took to her Instagram page to apologise to the elders of TAMPAN.

She wrote: “I would like to say thank you to @esabodofficialpage.

God bless you ma, Agba yin a dale 🙏🏽🙏🏽 I so much appreciate you mama & Love you.

First & foremost I want to appreciate God almighty, all mercifully, i love you Lord & I thank you for your constant protection, provision and guidance over me & my family. I’m forever grateful. 🙏🏽

I will also want to use this opportunity to say a very BIG thank you to all my darling fans and loved ones for your constant love & support … honestly I’m so overwhelmed & humbled, I will never take it for granted.

To an able & ever humble president of Tampan @mrlatin1510 thank you very much sir.

Our big daddies @adebayo.salami @princejidekosoko @realyinkaquadri on behalf of @nkechiblessingsunday my darling aburo & my humble self, we apologise to you sirs 🙏🏽 we’re sorry for getting you upset, you’re our elders & leaders, we respect you, we’re humbled before you, we will forever appreciate you & honour you. 🙏🏽
it’s all Peace & Love”✌🏽❤

In another news, the President of TAMPAN, Bolaji Amusan, popularly known as Mr Latin has apologised to the two actresses after Jide Kosoko threatened to work against them in the industry.

He said Jide Kosoko’s utterances were triggered by anger.

While speaking on Thursday, Mr Latin emphasized that Jide Kosoko is a nice man and he didn’t mean what he said.

“If you know Jide Kosoko, you know he’s a very good man. Iyabo Ojo can testify to this.”

“On behalf of Jide Kosoko, I apologise for his words during the conference. He did not mean those words. He uttered them out of anger.”

“Also, on behalf of TAMPAN, I apologise to everyone that felt offended,” Mr Latin said.

Nigeria-Ghana Trade Rift To Be Resolved Through Diplomatic Relations- Minister