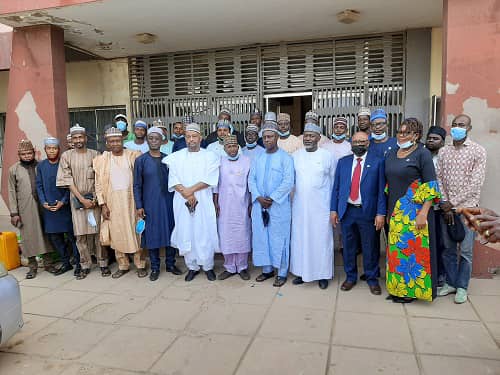 Katsina State Government has ramped up efforts towards achieving success in the development of Micro, Small, and Medium Enterprises (MSMEs) through the signing of a Memorandum of Understanding (MoU) with the Standards Organisation of Nigeria (SON).

Highlights of the MoU include the identification of priority products, capacity building of the MSMEs and certification of their products for local consumption and export.

The State Governor, Alhaji Aminu Masari, through his Deputy, Arch. Mannir Yakubu made the revelation during the signing of the MOU with the SON’s Director General, Malam Farouk Salim at the Katsina Government House recently.

According to Mannir, the signing of the MoU was sequel to an advocacy visit to SON by the Katsina State Micro, Small and Medium Enterprises Council towards accelerated certification of products and increased sensitization of MSMEs in the State.

In his response, Mallam Salim, explained that the MOU will create an avenue for SON to further improve the capacities of the MSMEs in the areas of standards appreciation, application, quality assurance and conformity assessment as enshrined in the Organisation’s mandate.

In response to SON’s request during the Abuja interaction, the Deputy Governor presented to Mallam Salim, documents for a parcel of land allocated for the development of a SON permanent office/laboratory complex and storage facility in Katsina.

Other resolutions reached during the interaction include;

– Setting up a joint implementation committee to fine tune a draft work plan with attendant deliverables by both parties for the prompt implementation of the MOU within agreed timelines.

During an audience with Governor Aminu Masari thereafter, the SON Director General, expressed appreciation for the high level of participation from the State on the MSMEs development to promote greater competitiveness of their products and services.

Responding, Governor Masari lauded SON for seeking to have a permanent presence in Katsina State.

He assured Mallam Salim of an enabling environment to support the industrialisation of Katsina State in order to drastically reduce unemployment as well as insecurity and criminality.

While interacting with the Katsina State Office staff, the Director General commended them for the efforts in apprehending substandard products in the state, some of which were jointly destroyed with officials of the State Government during the visit.

Mallam Salim also admonished them to take deliberate steps to familiarise with the SON mandate and its operations in order to be good ambassadors of the organisation at all times.