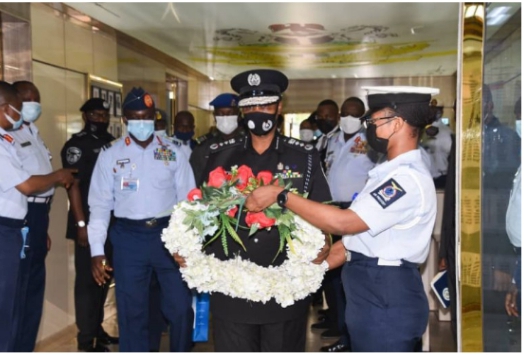 The Acting Inspector-General of Police, IGP, Usman Alkali Baba has restated the commitment of the Nigeria Police Force, NPF, to strengthen the existing cordial relationship between the NPF and the NAF, which he said had yielded several mutually beneficial collaborations in addressing internal security challenges in the country.

The police chief made this known during a courtesy visit he paid to the Chief of the Air Staff, CAS, Air Marshal Oladayo Amao, at the Nigerian Air Force Headquarters NAF HQ.

Baba said, “internal security is not all about the Police and other security agencies. Due to the current circumstances of insecurity in the Country, the military is currently involved in internal security operations to maintain law and order in all the 36 States of Nigeria,” adding that the issue of collaboration and synergy is key to ensuring that law and order is maintained in the country so as to enable Nigerians go about their lawful businesses.

The IGP stated further that crime and criminality has become more technologically advanced, hence the need for all security agencies to synergise their efforts and bring their expertise to bear. While commending the NAF for its key role in the fight against insurgency and internal security operations, he emphasized on the need for the two agencies to come together and work as a team.

According to him, the Nigerian Police and the NAF have a history of working together especially in the areas of training, joint patrol, and airlift of police personnel to places not easily accessible. He also added that his first point of call was to the office of the Chief of Defence Staff which is indicative of the critical role the Armed Forces of Nigeria play in maintaining law and order in the society.

In his remarks, the CAS, Air Marshal Amao, noted that the visit of the Acting IGP is a strong demonstration of The NPF’s commitment towards collaboration with sister security agencies.

The CAS, having recounted several instances where the NAF had conducted various internal security operations with the NPF, disclosed that the NAF would continue to provide necessary support whenever required, adding further  that twenty first century security challenges require strong collaboration and strategic partnerships among the security agencies to successfully overcome them.

Amao stressed also that while in internal security operations the NPF is the lead agency, due to military involvement in internal operations, the Defence Headquarters, DHQ, has now taken over the responsibility.

“Although the military is trained to contain external aggression, we hope to leverage on the experience of the police as we wade into internal security operations,” he said.

While congratulating the IGP on his recent appointment, the CAS emphasized on the need for constant interface and intelligence sharing between the Nigeria Police and other security agencies.

The visit was witnessed by some senior police officers from Force Headquarters as well as branch heads from NAF headquarters.

Prof. Auwalu Yadudu’s Scare Mongering: Why The NASS Must Ignore Him

Easter: Be Hopeful Things Will Get Better -Osinbajo Encourages Nigerians