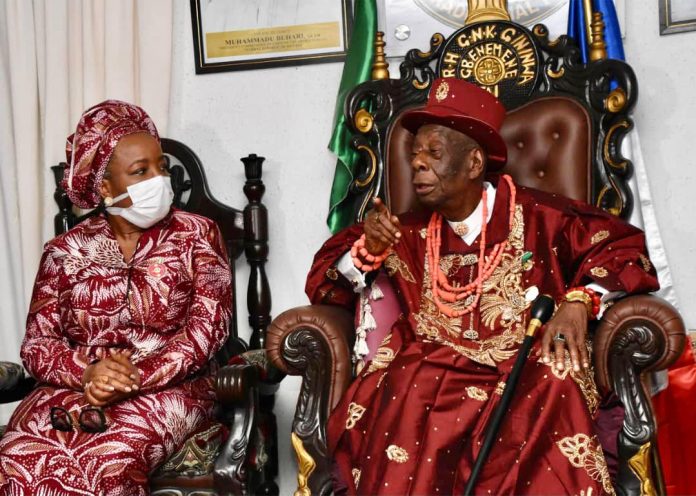 The Federal Government has promised to address the concerns raised by the Ogoni community about the on-going environmental remediation of oil impacted sites in the area.

This was contained in a statement signed by Mr. Saghir el Mohammed, Director Press in the
Federal Ministry of Environment.

TheFact Nigeria gathered that the clean up was being carried out by the Hydrocarbon Pollution Remediation Project (HYPREP).

Minister of State for Environment, Sharon Ikeazor made the promise while addressing community leaders, youths, women groups and other stakeholders in Ogoni at a forum held in Bori, the Council Headquarters of Khana Local Government Area of Rivers state.

She said that the essence of the meeting was to interact with them to find out the areas of the project they think needed improvement to better deliver on the mandate of the project and not the usual reading of prepared speeches.

“I would like to hear from you, and I will respond and tell you what we have planned for the Ogoniland clean-up project.

“I know we are behind schedule in some key areas, and I appreciate the concerns you raised here today about the project as this will help us to work together to fast track the process taking into consideration benefits to the communities.”

Ikeazor also said that the youths would be engaged as Environmental Surveillance Officers.

“We want to work with the youths and women groups to acquire the skills and be empowered for sustainable living so that we would not be doing this over and over again”.

Project Coordinator of HYPREP, Prof. Philip Shekwolo had briefed the stakeholders on the achievements of the project in the areas of remediation, provision of potable water, and livelihood training programs, among others.

His Royal Majesty, King Godwin N. K. Gininwa the Gbenemene of Tai Kingdom said, though HYPREP was not for only Ogoni, Ogoni people should be considered first before other communities as they had suffered so much degradation in their land.

The Royal Father appealed to the Federal Government to commence work on the proposed University of Environment to be sited in Ogoniland as it would assist in educating and training the people and put them in a better position to assist the community in managing the environment.

Other community leaders at the event also said they were happy with the efforts and enthusiasm of the Minister.

They therefore asked her to do her best in ensuring that the clean-up project made the desired impact on the people of the area.

Former President of the Movement for the Survival of the Ogoni People (MOSOP) and member of GBO KABAARI, Barr. Ledum Mitee, called for more visible benefits on the lives of Ogoni people.

“What we do that does not affect the life of our people is not clean-up. I will call what is happening a patronage mechanism and we need to diffuse it and make it inclusive for the effect of the clean up to be felt by Ogoni people”.

Mitee further called for the establishment of industries in the region to employ more people instead of giving handouts.

The Local Government Council Chairman of Khana, Bariere Thomas, speaking on behalf of the Chairmen of Gokana, Eleme, and Tai Council reiterated their support for HYPREP and pledged their commitment to the success of the clean-up project.

He also appealed to HYPREP to commence the building of the Centre of Excellence as outlined in the UNEP report and commended the Minister on her practical steps to set HYPREP on the right path.

“I want to, on behalf of my colleagues, assure you that we are impressed with your leadership as we have seen humility, commitment and sincerity of purpose in your approach.”

The Minister later undertook an inspection visit to the Alesa water station and some remediated sites in Alode, Eleme where she was impressed with the work done given the fact that the remediated lots now have flourishing vegetation an indication of the regeneration of the ecosystem.