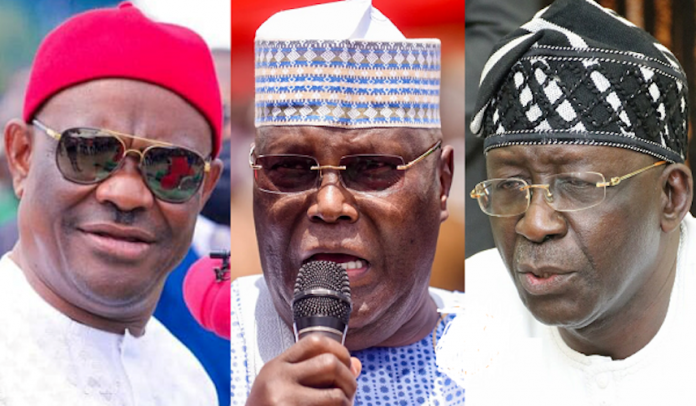 From All indications, the protracted crisis in the Peoples Democratic Party (PDP) may consume its National Chairman, Dr. Iyorchia Ayu as Atiku gradually bowing to the pressure from the Rivers State Governor, Nyesom Wike.

Ayu’s resignation chant began after the party’s convention where Southerners were pushed out of the scheme of things. Originally, the Presidential position was supposed to be zoned to South, especially South-East that has not produced a Nigerian President; but were denied.

Secondly, going by the party’s structure and zoning formula, the Presidential candidate was not supposed to have emerged from the same geopolitical zone with the National Chairman of the party. Therefore, Atiku’s candidacy and Ayu’s Chairmanship has violated that arrangement since they both emerged from the north.

Governor Wike perceived injustice in the current arrangement and demanded that the National Chairman steps down to give the sense of inclusiveness in the party structure.

The push however, became clearer yesterday when the Oyo state governor, Seyi Makinde insisted that Dr. Iyorchia Ayu steps down from the National Chairmanship position to allow Southerners in the top hierarchy of the party.

Makinde made the position of South-West leaders of the party known at the zonal stakeholders’ meeting held at the Prof. Theophilus Ogunlesi Hall, University College Hospital (UCH), Ibadan.

He said: “well, the issue is that we must practice what we preach. If we want to unify Nigeria, we must unify PDP first.

“If we want to restructure Nigeria, we must have the willingness to do what is right to bring inclusivity into PDP.

“The message from the South-West PDP is that the National Working Committee of the PDP should be restructured.

“We are asking the National Chairman to step down so that the South will be fully included. That is the message,” Makinde said.

In his reaction, Abubakar Atiku said: “overtime, PDP has developed its Constitution as regards party’s electoral processes, zoning of offices, power sharing, among others, which will bring about unity of the party and the country.

“Therefore, the request of Gov. Makinde is achievable under our party’s Constitution, rules, regulations and procedures.

“So, the party’s Constitution must guide us on whatever changes we make,” he said.