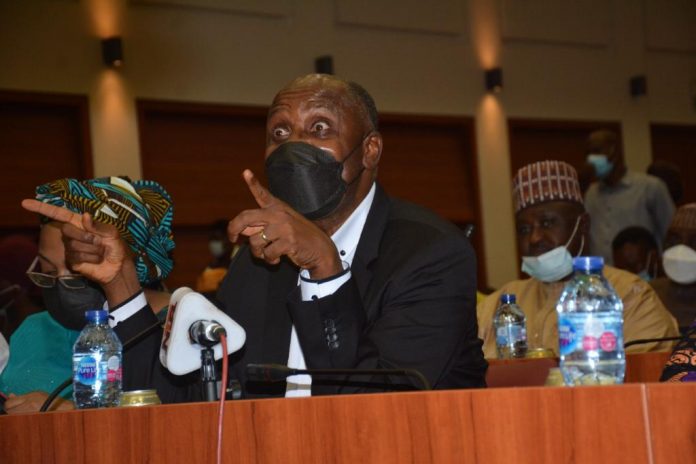 The Federal Government has said it would prioritize the completion of all ongoing railway projects across the country in other to spur economic growth and facilitate trade between Nigeria and other African countries.

The Minister of Transportation, Rotimi Amaechi, made this assertion in a statement signed by the Director of press and public Relations, Eric Ojiekwe on Friday.

TheFact Nigeria reports that the minister on Thursday presented a total capital budget of N 147, 931, 691, 294, and overhead of N 358, 799, 998, as the 2022 Budget proposal of the Federal Ministry of Transportation to the Joint Committee of the Senate and House of Representatives on Land and Marine Transport at the National Assembly Complex in Abuja.

The minister said, “we will continue to construct more rail to connect other African or West African countries who are involved in rail management. The moment we do this logistics so that from point A to B, you can move cargo, you can move human beings, you can move trade” he said.

Amaechi stressed on the need for the members to support government drive the ongoing Dry Ports projects across the country which includes the Baro Dry Port and Lokoja River Ports.

He said the ports will thrive if an interface or linkage of the proposed rail lines are completed as Rivers Benue and Niger have a depth of 3 meters and only barges and tugboats can operate within such parameters.

“So, our intention was if we can take railway to everywhere in Nigeria, we would have peace, if it is passengers, it will have, if it is cargo, it will have” Amaechi said.

Reacting to “why rail line should lead to Maradi in Niger Republic Amaechi said construction of the Standard Gauge line will enable interconnectivity with countries in the West Africa sub region for the promotion of trade and commerce”.

He also explained that Kano-Maradi was not borne out of his personal ambition but rather a survey which had been carried out by previous administrations and government been a continuum, he only deemed it fit to implement the plan taking into consideration the viability of the project when completed. Besides, he further explained that the rail linkage that gets to Maradi is only 20 kilometres

He said since getting the money to reconstruct the narrow gauge is easier, it made economic sense to connect the whole country by narrow gauge while still sourcing for funds to do the standard gauge.

Furthermore, the Minister explained that the main difference between the narrow gauge and the standard gauge was merely speed. While the former does 100 km/h, the latter does 120 km/h.

Reacting to the issue of loans, the Minister informed that the only money borrowed so far is the $ 1.4 billion spent on Lagos – Ibadan rail, explaining that loan approvals do not translate to cash.

According to the Minister, thus far, the completed and flagged-off rail corridors of Lagos-Ibadan, Warri-Itakpe, Abuja-Kaduna for commercial operations has employed over 500 skilled workers, 1 million indirect employments not forgetting to mention commercial activities that have received a stimulus along these corridors.

Responding to reasons behind the cut in budgetary submission of the Nigeria Railway Corporation (NRC) from 18 billion in 2021 to 7 billion naira in 2022 he said “The NRC must move from being dependent on government to being dependent on themselves. I am not saying they are not doing well. After all, we are getting 350 million now from Abuja -Kaduna ….. It was 70 million” he Said.

He further disclosed that from the proceeds, the Ministry has been able to sustain work along other rail corridors and cleared that the Managing Director, NRC, to see and run the Corporation as though it was a personal business in order to generate more funds for government while a charting a course for self-reliance.

In her contribution on the ongoing rail projects, the Minister of State for Transportation, Sen. Gbemisola Saraki, said that the rail projects are not personal as against public opinion.

She added that with ratification of the African Continental Free Trade Agreement, the proposed and ongoing rail projects positions Nigeria to be more competitive regionally.

CAN Kicks, As Buhari Keeps Mum Over Gumi’s Comments