The Nigerian Army, NA, and its Turkish counterpart have pledged to strengthen military bilateral relations between both countries to tackle terrorism.

This was disclosed, Monday 30 August 2021, when the Turkish Ambassador to Nigeria, Ambassador Hidaye Bayraktar, paid a courtesy call on the Chief of Army Staff, COAS, Lt Gen Faruk Yahaya, at the Army Headquarters, Abuja.

TheFact Nigeria notes that efforts have been made in recent times to strengthen relations between both counteies. Ambassador Bayraktar had, in May this year, visited Nigeria and met with the country’s foreign minister, Geoffrey Onyema in the capital, Abuja, and discussed bilateral relations. The Turkish Ambassador had told Onyeama that senior Turkish officials were willing to pay a visit to Nigeria in near future.

During his visit with the COAS, Ambassador Bayraktar stated that the purpose of the visit was to improve upon the existing relationship between the two countries and to assist Nigeria in its fight against terrorism.

The Ambassador further averred that, like Nigeria, Turkey had equally been confronted with challenges of insecurity. He pointed out that the Defence Corporations of both countries have to come into mutual agreement in order to curtail the activities of terrorists in both countries. 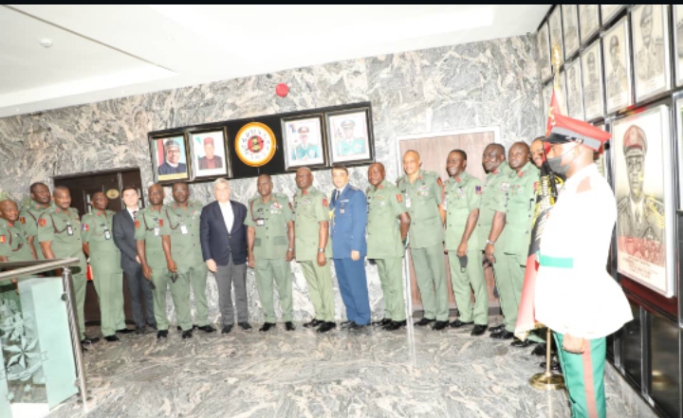 In his response, the COAS described the visit as an opportunity to further enhance the existing cordial relationship between both countries, particularly the Land Forces of Turkey.

He disclosed that during his recent tour of Turkey, he had paid a visit to the Turkish Defence Corporation, describing it as a very insightful tour. Gen Yahaya further stated that the relationship between the two countries will shore up the fighting capabilities of the armies of both countries through sharing of intelligence and operational experience.

Present at the visit were Principal Staff Officers of the Army Headquarters.