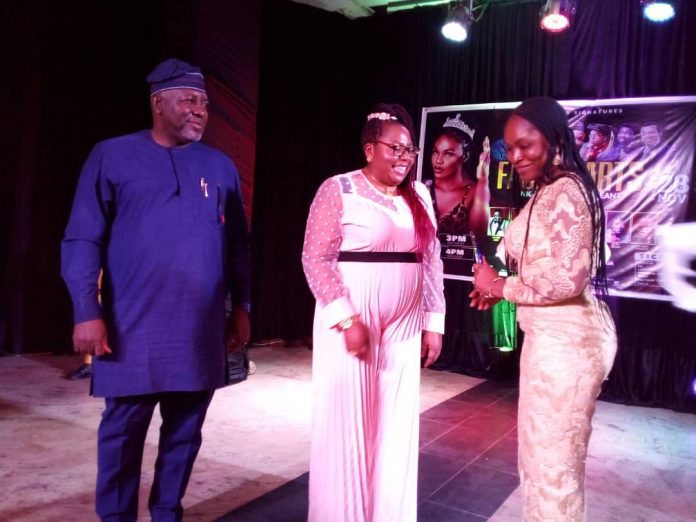 The event was the fifth edition of the Face of Arts beauty pageant (Boss Lady Edition) which held in Abuja.

TheFact Nigeria reports that the awards were hosted by Black Giants Signatures.

Lifetime Achiever of the Year 2021 award was presented to Prof. Angya by Barr. Joy Okpainmo on behalf of Senator Abba Moro.

There were other personalities who received awards in different categories.

The organizer, Lawrence Okpe said that the  pageant was started in Benue State University, five years ago.

Okpe said that the African Giants awards was initiated to honour those making big impacts in the society.

Other awards in different categories were sponsored by B.U.T Clothing, the fashion brand of the year 2021 and presented by former Miss Face of Arts, Miss Blessing Lapnamiel.

The Professor of  Drama and Theatre Arts, Angya in a brief speech after receiving the award, thanked her parents for inculcating values into her leading to achievements in life’s pursuits.

She also thanked her husband, family and well wishers for their support.

Prof. Angya said: “I feel totally overwhelmed by the award that I have received today and I thank the organizers of the event for finding me worthy to be given this recognition.

“I thank the Almighty God who makes all things possible and Who has been with me on my life journey.

“I appreciate my parents for the values they drilled into me.

” I appreciate in a special way my husband Paul Angya who has been my support through the years, my children for the joy of being a mother to them and my entire family and friends for rooting for me.

“I pray that this award be the wind to my sail and provides the drive needed to reach out to serve God and humanity. Thank you all and good night.”

The Award of Movie Director of the Year was received by Mr. Emmanuel Yaba.

The event was a convocation of Who is Who in the entertainment industry in the country.