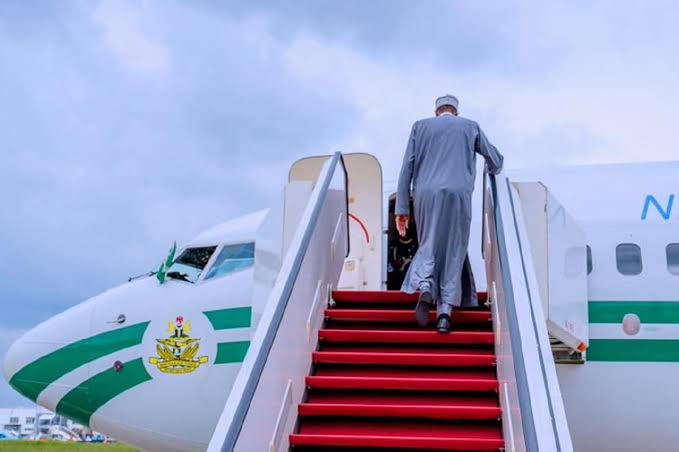 Nigerian President, Muhammadu Buhari is seriously competing to break the record of Former President, Olusegun Obasanjo and Pope John Paul II as most travelled Presidents in the World.

Obasanjo had travelled more than any other head of government in the world. Halfway into his tenure it was computed that he embarked on an average of two trips abroad every month.

Report had it that Obasanjo even outdone the Pope who has the whole world as his constituency. For while in 24 years the Pope travelled for 91 times, Obasanjo travelled out of the country 93 times in three years (from May 29, 1999 to June 10, 2002).

The reason for the President’s innumerable foreign trips, according to official records, were to beg for debt forgiveness, attract foreign investors and burnish the country’s image.

Unfortunately, he later admitted to the fruitlessness of his trips. In an interview with the Financial Times in March 2002, he said: “in three years, I went round the world and did not get anything. From April 1999, I went round the countries in Europe twice over; I went to Japan, to America, to Canada and got good words …but no actions at all.”

Of course, all the estacodes paid in foreign exchange to his team were wasted, nothing to show for it.

Records have it that President Buhari has embarked on ten (10) foreign trips in five months usually with a large entourage.

His last trip was on Wednesday this week, June 22, 2022 precisely, when he embarked on a trip to Kigali, Rwanda, to attend the 26th Commonwealth Heads of Government Meeting #CHOGM2022 being held from June 20 to 26, 2022.

In June, 2022 only, Buhari embarked on three trips: On Saturday, June 4, he was in Accra, Ghana to attend an extraordinary summit of the ECOWAS Authority of Heads of State and Government on the political situation in Mali and other parts of the sub-region.

Recall, he embarked on a 3-day state visit to Madrid, the capital city of Spain and now his visit to Rwanda.

His Special Adviser on Media and Publicity, Femi Adesina said, he travelled to Spain to discuss issues of mutual interest to both countries.

The trip, according to Adesina, resulted in the signing of agreements and Memoranda of Understanding on a wide range of areas such as the extradition and transfer of convicted persons, mutual legal assistance, cultural matters, cooperation towards fighting crime and enhancing security, as well as issues affecting dependants of diplomatic staff.

“Also on the agenda are cooperation on energy, trade and investment, transportation, public health and sports development,” Adesina said.

Recall, Buhari also visited Brussels, Belgium in February when he joined other world leaders for the 6th European Union-African Union Summit; Nairobi Kenya in March, where he attended the 50th anniversary of the United Nations Environmental Programme; Addis Ababa, Ethiopia in February for the 35th Ordinary Session of the Assembly of the Africa Union Heads of State and Government; and London, the United Kingdom in March, for a two-week medical check-up.

The Senior Special Assistant to the President on Media and Publicity, Garba Shehu, while defending Buhari said, there were many benefits inherent in all the trips.

“There are several takeaways from the President’s visits to these countries,” Shehu said.

As succinctly put by Fred Ohwahwa, “before the President travels, there is usually an advance team; he gets there with a large entourage and leaves behind some people who will clear up things. …all of them are collecting estacodes in foreign exchange.

“Calculate the money … the executive arm alone has spent on estacodes since 1999, and you will begin to understand how grievous the waywardness of this people is.

“By the time you add the money the legislators are spending in this regard to that of the state governors who travel abroad just as frequently as the President, Nigerians will lynch them, if they know what these so-called public officers are wasting.

“The money they spend in each of these trips will provide pipe-borne water for several communities; … electricity for many of our villages. … the money they are spending on airfares and estacodes will go a long way in rehabilitating our roads. … I have not seen a more irresponsible set of people in my life.

“Even countries that are more developed and have more resources, the leaders don’t behave in such a wasteful manner”, Ohwahwa said.

It’s doubtless a trying time in Nigeria’s history with citizens living heart in mouth, not sure of the next news, biting economic hardship, lingering ASUU strike, killings, reocurrent kidnapping, banditry and myriads of insecurity.

At a time when they need the soothing presence and calming words of the number one citizen they have been left distraught, orphaned as the president’s body language insinuate it’s every body to his tent.

We stand for fruitful trips only. The ones that would change the numerous challenges the country is currently facing, and not those that would further impoverish us.

FCT Police Deploys Officers Ahead Of Councils Polls On Saturday