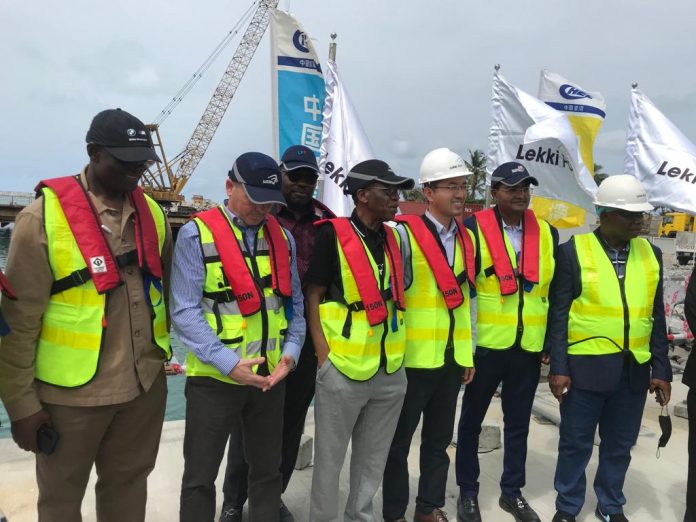 The Federal Government has said that an estimated $201 billion revenue will be generated from The Lekki Deep Sea Port in the next forty five years, when it would be operational.

The Minister of Information and Culture, Lai Mohammed made the disclosure, Wednesday, during an assessment tour of the multi-billion naira project, located at the Lagos Free Zone.

TheFact Nigeria reports that the cost of the mega project was put at $1. 53 billion.

Mohammed said that both the Federal and Lagos State governments would share from the anticipated earnings.

The minister, who was accompanied by senior officials from the Federal Ministry of Transportation, expressed satisfaction with the quality of work, even as he urged the media to bring to public consciousness the achievements of government.

Mohammed reiterated the fact that at least 169,972 jobs would be created for Nigerians, thereby reducing the unemployment level to the barest minimum.

He said the project is a “game change” because of the impact it will have on the nation’s economy and the jobs it will create, among others.

“In addition, it will create 169,972 jobs and bring revenues totalling 201 billion dollars to state and federal governments through taxes, royalties and duties. The direct and induced business revenue impact is estimated at 158 billion dollars, in addition to a qualitative impact on manufacturing, trade and commercial services sector.

“Beyond that, when it begins operation in the last quarter of this year, it will make it possible for Nigeria to regain the maritime business that was lost to ports in Togo, Cote d’Ivoire and Ghana. It is also a big boost to Nigeria in its quest to take advantage of the implementation of the African Continental Free Trade Agreement (AfCFTA)”.

He explained that: “The major advantage we have to leverage is transshipment. With this port, Nigeria will become a transshipment hub and the revenue we are currently losing to our neighboring countries will come here. That’s big!

“As you know, this project is being done in phases. Phase 1 has reached 89 percent and will be completed in Sept this year.

“The facilities here are first class. We have 7 ship to shore cranes and 21 RTG cranes. No port in Nigeria currently has this. The excellent equipment is why this port can do 18,000 teu, which is more than four times the number that can currently be handled by our other ports.

“Also, the project is self sufficient in required electricity. It is now read to generate up to 10 Mega Watts and the total capacity is 16 mega watts.

“Overall, this is another example of the first class infrastructure being developed across the country by this administration. Whether it is roads, rail, airport terminals, gas pipelines, housing, ports, just name it”.

On cargo evacuation and linkage of rail to the seaport, he said: “I think the minister of Transportation would have been in better position because he would have given you detailed information as to the progress being made with the issue of rail but what I said and which is the truth is that we are as concerned about the efficient evacuation of goods and services at the port as anybody and we know that the ultimate would be to connect this port to rail for optimal use.

“If my figures are correct, I think this is a collaboration in which the Lagos state has 20percent, NPA 5 percent and the rest is shared amongst others.

“NPA being the statutory authority to run our port, I think they are being farsighted in teaming up with Lagos state group to get us another seaport which will be able to perform what is not achievable at the Apapa port because we were told that while that port can do about 5.5TU that here, we can do about 18. I think NPA are being far sighted to see that they need to expand their operations,” the minister said.