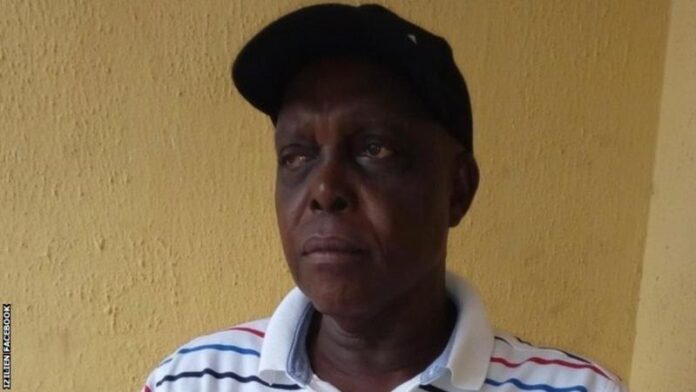 Seventeen years after leading Nigeria to continental success, former women’s coach Godwin Izilien has said the country’s football authority must settle its long-standing debt to him.

Izilien says then NFA (now NFF) owes him $28,750 in match bonuses for winning the 2004 African Women’s Cup of Nations in South Africa.

Current NFF president Amaju Pinnick had previously acknowledged and vied to sort it out, but three years after failure to make good on his promise, the veteran coach said his patience is fast running out.

“I met Pinnick in 2018 and he promised to pay me in the presence of my state governor, but that’s three years ago and they’ve refused to pay,” Izilien told BBC Sport.

“You’d think that after scoring 18 goals and two goals against, they will show you respect but instead I am still begging for what I worked for almost 20 years ago.

“We had a big scandal at the end of the championship, I managed it to the best of my ability and maybe this is the only way for them to pay me back.”

A day after their 5-0 victory over Cameroon, the Super Falcons refused to leave their hotel in South Africa, insisting that a US$6,000 per player bonus be settled by the football body.

Izilien claimed the NFA wanted him to return during the team’s sit-in, but he stood by his players, something which he says could have led to him being omitted from the payment agreement.

“My girls were paid before they left South Africa but I wasn’t. I was told for not returning as ordered I didn’t deserve to be paid,” he added.

“I have coaching ethics and couldn’t have done such things as alleged by those in authority.

“I don’t want to believe this is the reason to hold onto my money because a worker is worthy of his wages.”

The NFF president is presently out of the country, while general secretary Mohammed Sanusi told the BBC that only the chairman of its Technical and Development Committee, Ahmed Yusuf Fresh, ‘can look into this particular issue’.

Izilien, who went on to manage the country’s Under-17 side in 2005, said the long silence has left him feeling upset.

“My children have been taking care of me but I don’t want to die waiting for what I worked for,” he added.

“They [NFF] should not start praising me when I am gone, because I am not a young man full of life, but someone who is old and only demand for what he deserves.”