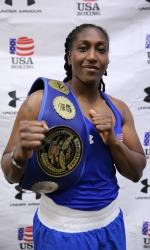 “It’s important for equality across the board,” Danielle Perkins says in an exclusive interview with Sky Sports. “We need to have a female heavyweight division for the Tyson Furys, the Anthony Joshuas, the Deontay Wilders.”

The unexplored final frontier of women’s boxing is its heavyweight division, a barren and unrecognised landscape that stands meekly in contrast to the marquee fights of Anthony Joshua, Tyson Fury and co.

But there is a big-punching and even bigger talking heavyweight from the United States who takes inspiration from her mum, who has overcome the mental trauma of a catastrophe that took away the life she once knew, and who wants to smash a hole through the glass ceiling of acceptance.

Danielle Perkins is on the road to becoming a female heavyweight champion – alongside Joshua and Fury as peers, she would become a high-value commodity who could “catapult women’s boxing” and whose voice demanding equality would only grow louder.

Savannah Marshall, the unbeaten world champion, joked that she would rather fight for a middleweight title because “what woman wants heavyweight mentioned after her name?”

The resurgence of women’s boxing that includes Marshall, Katie Taylor, Terri Harper, Claressa Shields and Jessica McCaskill is restricted beneath the biggest divisions.

The weight limit is more accommodating (heavyweight is above 175lbs for females, above 200lbs for males) but there is no women’s champion of the division that is the showbiz centre for the men.

The most recent, Alejandra Jiminez, recently failed a drug test and the No 1 ranked WBC contender, Laura Ramsey, is 51 years old.

“I want to put my mark on the sport as a female boxer, and to sit on the throne as a female heavyweight,” she tells Sky Sports. “I want to invite anyone, everyone, who is athletic and strong to step into the ring and battle for the crown.”

Her advisor Mark Taffet adds: “I believe a true female heavyweight champion, both in and out of the ring, would catapult women’s boxing and create intrigue and interest among a whole new generation of fans.

“Danielle Perkins is six feet tall, 200 pounds, is in tremendous shape, has outstanding boxing skills, and carries herself like a champion. She is the perfect woman to lead and fulfil the promise of a revitalised, prominent female heavyweight division.”

The talk is bold for a contender who has had only two professional fights but there is genuine reason to be excited.

Perkins became the first amateur world champion from the US, male or female, in three years when she beat defending champion Yang Xiaoli of China in 2019.

It is already a stunning turnaround from when Perkins lay immobilised, severely traumatised and with her sports career in ruins.

“I want to put my mark on the sport as a female boxer, and to sit on the throne as a female heavyweight”.

Perkins was an outstanding college basketball player before a professional career took her to teams in Italy, the Czech Republic, Puerto Rico, Austria and Spain.

But she was struck by a vehicle, leaving her paralysed and eventually needing to learn to walk again.

“At my darkest point, if I couldn’t have athletics again, I didn’t want to be alive,” she says.

“Certain things in life give you an opportunity to remain stagnant or turn a corner by making difficult choices.

“I refused to quit. I wanted to have the basics back – to walk again, to be functional, and playing basketball again was my ultimate goal.”

Perkins began exercising again and fell into a sport synonymous with where she’s from.

“I grew up in Brooklyn in a household of Mike Tyson fans but boxing wasn’t an option for me,” she says. “My father would not allow his daughter to box so I played basketball.”

After accepting her basketball career was finished, Perkins “wanted to be competitive but didn’t know how” when a friend noted that her physical dimensions would be ominous inside a ring.

Now Perkins, who remembers the frenzy in New York during Tyson’s heyday, wants to have a similar impact on the women’s heavyweight division.

“My goal is for people to say: ‘You’re 200lbs? Train hard enough and maybe you can fight Danielle’.”

She fights for the third time in a rematch with Monika Harrison on March 5, on Claressa Shields’ all-female undercard.

The prospect of a physically dominant women’s heavyweight champion with a backstory of adversity who advocates change is powerful.

Perkins says about revitalising the glamour division: “It’s important for equality across the board.

“We need to have a female division for the Tyson Furys, the Anthony Joshuas, the Deontay Wilders.

“If we had that athleticism and skill in a female heavyweight division, there would be so many people interested.

“It is as important as the male division to have a solid, talented female heavyweight division.”

Anthony Joshua tells Sky News both his and Tyson Fury’s teams are in negotiations to finalise their blockbuster heavyweight unification fight and are working on a date around June.

The resolve and the strength behind Perkins, 38, is in her blood.

“My mother has always overcame things,” she says. “She always worked so hard.

“There were drugs, crack, robberies, murder but we were untouched by that because my mother was such a strong centrepiece of the community.

“She made a bubble for us and we did not see these things.

“When my mother battled cancer, she had the same mentality.

“I now understand that it’s not about your surroundings, it’s about your mentality.”

Perkin’s insistence that she will drag the sleeping female heavyweight division onto the same thriving platform as the men’s makes it remiss not to ask her one final question.

She laughs and interrupts: “I’m pretty slick and I hit hard.

“I’m more similar to Fury – he’s slick, he hits hard, he has strategy, from round to round he makes solid adjustments, he looks like a middleweight fighting as a heavyweight, he’s strong and tall, he can fight going backwards or forwards.”

If a female heavyweight can emerge with similar skill and charisma, the boxing landscape would be revolutionised.