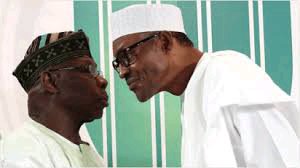 The All progressive Congress (APC) has aimed another shot at members of the Peoples Democratic Party (PDP) and in response to former president Obasanjo’s criticisms to Buhari-led administration.

Olusegun Obasanjo while delivering a speech titled ‘Moving Nigeria Away from Tipping Over’ at a consultative forum has blasts Buhari for allowing the country to dwindle and sink into a doldrum. Obasanjo claimed that Nigeria has become more divided than ever in the history of our democracy and needs an urgent rescue from the brink of collapse.

Responding to Obasanjo’s letter, the APC in a statement on Sunday September 13 signed by the Deputy National Publicity Secretary Mr. Yekini Nabena said, “It is baffling that the same political actors that midwifed and institutionalised the national rot, corruption, impunity and eroding of our value systems are the same characters posing as voices on the way forward in our national life”.

Further speaking, Nabena said “Former President Olusegun Obasanjo could start with telling us where the electricity is despite $16billion he spent on the power sector. Obasanjo’s deputy, Alhaji Atiku Abubakar should account for the privatisation exercise under his watch which saw national assets sold off to friends and cronies with no benefit to the country.

“Successive Peoples Democratic Party (PDP) administrations can also start by accounting for the trillions stolen from our national coffers in the guise of a fraudulent fuel subsidy regime.

“These political actors probably only listen to their own voices because Nigerians have long stopped taking them seriously as they simply lack the antecedents and moral credentials to guide Nigeria and Nigerians to the path of prosperity and progress”.

APC further accused Obasanjo of being the architect of corruption in the Country and urged him not to be jealous but to tender his support to President Buhari in his bid to remedy the Nation from the ruins and damages from PDP 16years of misrule.

Why We Lifted Suspension on Spectrum Trading Guidelines -NCC

“My Son Is languishing In French Prison”, Nigerian Widow Cries For Help