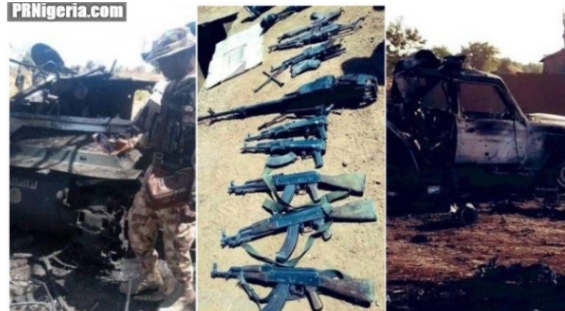 Nigerian troops on Wednesday, foiled a terrorist attack in Askira Uba town in Borno State, which led to the killing of about 31 Boko Haram terrorists, and the destruction of nine of their eleven  gun trucks.

A military intelligence officer said that the feat was achieved through the joint efforts of the Nigerian Airforce (NAF), whose aircraft shelled the Boko Haram gun trucks, and the ground troops, who pursued fleeing terrorists for elimination.

“Aircraft were scrambled from Yola and Maiduguri within minutes after ground troops sent the signal.

“For the first time in years, the speed of response between the air taskforce and ground troops is unprecedented,” the intelligence officer said.

He said further that the mobile task teams have also been very active in eliminating combatant terrorists seen on sight and hidden in the vicinity.

Meanwhile, Senator Ali Ndume of Borno State, and Chairman, Senate Committee on Army, has commended the renewed vigour, and fighting spirit of troops in recent weeks.

“I commend the efforts of the men of the Armed Forces which has now given the people confidence that when they hear any information and contact the Army, they would come to their aid.

“The military operation in Askira Uba was professionally executed as there was no loss of lives or property of the indigenes except the killings of the insurgents that attacked the town.”