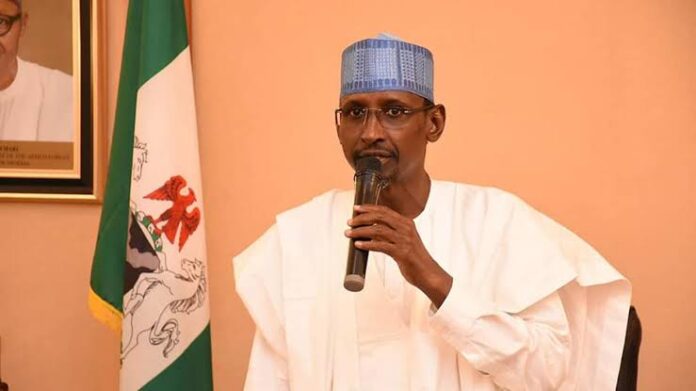 The Minster of the Federal Capital Territory (FCT), Muhammad Bello has tasked the management of the FCT Health Insurance Scheme (FHIS) on the need to ensure every resident of the city is covered under the Scheme.

The Minister made this charge over the weekend while receiving the working Documents of the scheme from the FHIS Director, Dr Ahmed Danfulani and his team.

TheFact Nigeria reports that one of the mandates given to the FCT Administration by President Muhammadu Buhari was to widen the health insurance coverage of FCT residents.

According to the minister, “the mandate given to us by President Muhammadu Buhari is to widen coverage of health insurance in the FCT and the mandate I am giving you is to ensure that every citizen in the FCT, either in the formal or informal sector is covered”.

Bello also urged the FHIS management to ensure that the FCT Health Insurance Scheme succeeds in the Territory because, payment for health services all at once either by individuals or even the government is no longer tenable, considering the ever increasing cost of medical services especially for diseases such as cancer or orthopedic procedures

He said “you have to work out a system so that certain diseases can be covered. If for instance someone is diagnosed with cancer, how can he or she pay for it? Cancer treatment, even the medication alone or chemotherapy alone, costs a lot of money not to talk of radiotherapy or surgery for some orthopaedic cases”.

The minister asked the FHIS team to also work out ways in which enrollees under the scheme had the option of paying more for wider coverage, urging them to improve their services and grow the Scheme based on sound business practices, financial management and a robust ICT infrastructure.

While calling on the FHIS team to develop a robust publicity strategy in order to meet its objectives,the minister also urged them to work out a system that will take care of the aged in the society.

He said, “you have to work out a system to make sure that the aged pay only a reasonable amount of money to get good quality healthcare because they have served the country and the FCT, so it is now the duty of the country to take care of them.”

Earlier in his remarks, Danfulani, while presenting the Working Documents to the Minister, explained that the documents were prepared over a period of two years and will guide the everyday operations and activities of the scheme.

The documents presented include the “FHIS Standard Treatment Guideline and Referral Protocol” which is designed to ensure that patients are aware of the full extent of treatment they are entitled to.

Also presented to the Minister is the “Operational Guideline of the FHIS” which according to Dr Danfulani “describes in detail every step that we need to take in any of our actions, including registrations of healthcare providers, registration of HMOs, their roles, our roles, punitive measures to be taken when they err and so on.”

According to the statement by the chief press Secretary, Anthony Ogunleye,those present at the event were the Chief of Staff to the FCT Minister, Malam Bashir Mai-Bornu, the Director, Department of Human Resources Management, Dr Bashir Muhammed, the Ag General Manager, FCTA Hospitals Management Board, Dr Francis Alu, the Ag Director, Department of Reform Coordination and Service Improvement, Dr Jumai Ahmadu and other senior staff of the FCTA.

No Mercy For Perpetrators Of Plateau Killings -Buhari Declares