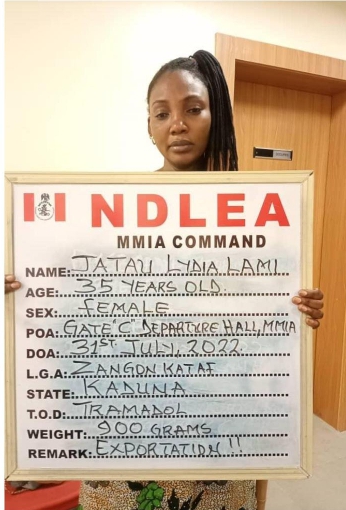 A female passenger who was arrested at the Lagos Airport for attempting to export drugs, has disclosed that she was desperate to raise N5m ransom as demanded by bandits who kidnapped her mother in June.

This was made known by the National Drug Law Enforcement Agency (NDLEA) Director, Media and Advocacy, Mr. Femi Babafemi, in a statement, Sunday, 7 August, reviewing the activities of the Agency in the last one week.

TheFact Daily gathers that Lydia Lami Jatau was arrested Sunday, July 31, after 1,700 tablets of Tramadol 225mg was found concealed in her luggage, which she attempted to export to Istanbul, Turkey via a Turkish Airline flight.

Jatau, a mother of three, hails from Zango Kataf LGA in Kaduna State, and lives with her family in Istanbul, Turkey, but came home to raise the ransom and buy her mother’s freedom.

Babafemi further disclosed that operatives of the Agency had also arrested a trans-border drug dealer, identified as Pastor Anitie Okon Effiong, who was traced to a 90kg consignment of crystal methamphetamine, locally called Mkpuru mmiri, believed to have been imported from India. 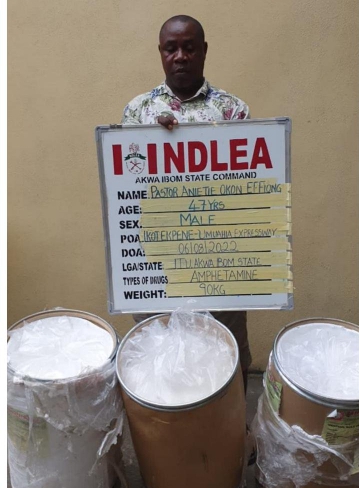 The consignment, which was loaded into a commercial bus at Ojuelegba in Lagos, was intercepted during a stop and search operation along Umuahia-Ikot Ekpene highway, on Saturday, 6 August.

The drug was packed in three drums, each containing 30kg of the illicit substance and meant for the Pastor, who was arrested in a follow-up operation in Oron, Akwa Ibom State.

This arrest comes on the heels of four seizures of the same illicit drugs weighing 4.07kg, headed to Australia, Indonesia and Philippines, and 3kg of cannabis sativa, heading to Dubai, United Arab Emirates, UAE. The drugs which were found at courier companies in Lagos, were concealed in body creams, hot burner and beads.

Also, two freight agents, Oladipupo Oladayo Fatai and Animashaun Qudus, were arrested on Thursday, 4 August, in connection with attempts to export two consignments of cannabis in a consolidated cargo to Dubai. Two other agents also culpable are currently at large.

We Have Results To Show For Our Operations – Nigerian Army