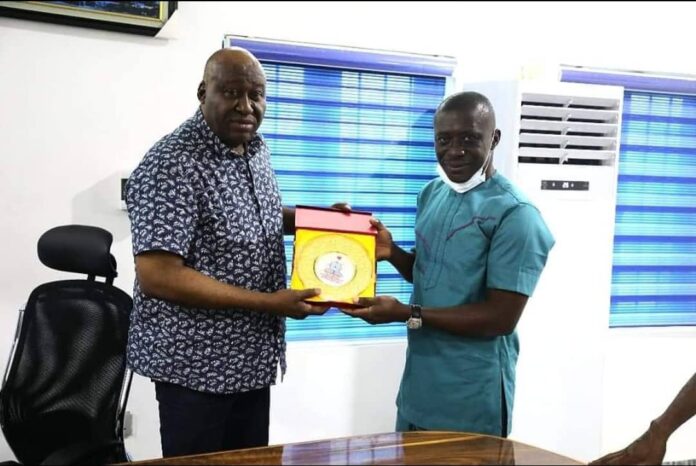 The Vice Chancellor of Nigeria Maritime University, (NMU) Prof. Emmanuel Adigio has lauded the Rector of the Maritime Academy of Nigeria, Commodore Emmanuel Effedua (Rtd.) over his outstanding efforts at repositioning the nation’s premier maritime education and training centre to world class in less than 4 years in office.

The VC who was represented by the Dean, School of Maritime Transport and Logistics of the institution, Dr. Victor Omoke made this known recently during the educational tour of the Academy by Cadets of NMU.

TheFact Nigeria reports that Omoke, while commending the rate of transformation in the Academy, classified the quality of educational and infrastructural facilities as second to none in the Country.

He hinted that the class of leaders in the likes of Effedua is what Nigerians desire, adding that Nigeria needed to replicate his likes in every sector of the economy for speedy positive changes.

He said “I visited the Academy few years ago and it is nothing compared to what I have seen today, the transformation is massive. In fact, this is the kind of leaders Nigerians have been praying for, I believe productivity, efficiency and transparency is a rare trait in leadership and should be lauded if found in any leader”.

“In Nigeria, people crave for second term even when they did not achieve much in their first tenure, I am of the opinion that second term should be considered on the strength of ones performance during the first term, I want to add that from all indications you deserve a second term,” he added.

He explained that the aim of the educational tour was to expose their Cadets to hands-on experience in the maritime industry and therefore expressed his Management’s desire to collaborate with the Academy in the area of training, since the Academy has the required facilities that would help them achieve this objective.

In his remarks, the Rector who attributed his achievements in the Academy to the cooperation of his Staff and Management, said he was able to achieve all what he has achieved today with the funds he got from blocking financial loopholes that existed in the system before his assumption in office.

He also advised the NMU Cadets to shun acts of cultism and other vices inimical to their studies and future by extension, saying that they have to justify the confidence their parents reposed in them.

The Rector further said that considering the fact that both institutions have similar mandates, collaboration in the area of training would be a welcomed development since NMU Cadets would have the opportunity of taking advantage of the state-of-the-art educational facilities in the Academy to enhance their practical training.

He therefore said that as part of its contribution to fast track the partnership process, the Academy would offer free accommodation and reduced fees for NMU Cadets who would take up Mandatory/Short Courses in the Academy.

“Initially when I was appointed the Rector I was ashamed because of how the Academy was, but then we worked day and night and I am happy to say that we have made significant changes.

“Your school can take advantage of the facilities we have here, likewise mine, whatever we can do for your school to help develop the maritime industry would be done, our doors are open, he said.