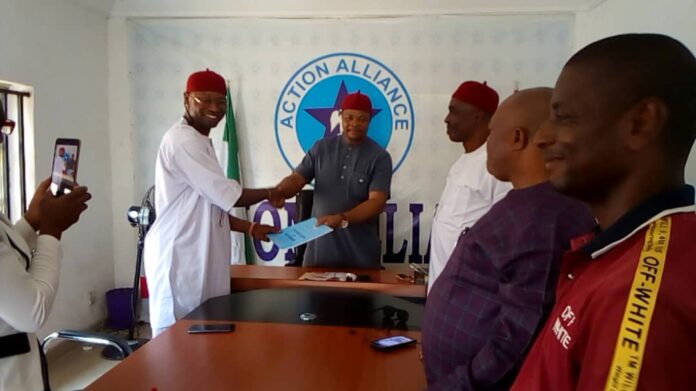 The National Secretariat of the Action Alliance party in Abuja came alive few hours ago with a visit by Chief Dr Nnamdi Nwawuo, an aspirant of the Party seeking election at the upcoming Anambra November Governorship elections.

He was received by Mr.Vernimbe A. James, National Secretary and Barr Malachy Nwaekpe, National Legal Adviser, both top officials of the party.

The Action Alliance enjoined leaders at all levels and members of the party to encourage and give support to all interested aspirants seeking elective positions under the Party.

Action Alliance also emphasised that all candidates, be given fair chances while choosing who the next Guber Candidate of the Party will be in the Anambra November elections.

This information was obtained from the official Twitter handle of the Action Alliance, @ActionAlliance4 on Saturday.

“The National Chairman enjoined leaders at all level and members of the party to encourage and give support to all interested aspirants under our great Party, by given fair chance who the next Guber Candidate of our Party will be in Anambra state.”

With the recent deregistering of the 74 political organizations in the country by the Supreme Court, the governorship election in Anambra State slated for November 2021 would be keenly contested among candidates from the 18 political parties approved by the Independent National Electoral Commission, (INEC).