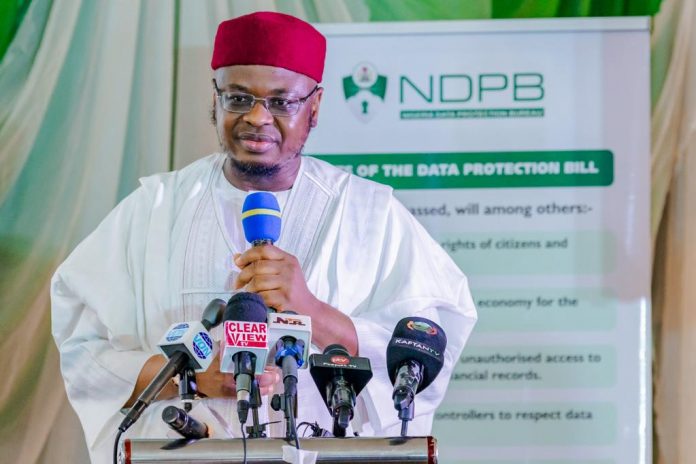 The Minister of Communications and Digital Economy, Prof. Isa Pantami has stressed on the need to implement legislations that would ensure the protection and confidentiality of citizens data.

Pantami’s position was disclosed in a statement on Wednesday by his spokesperson, Uwa Suleiman in Abuja.

The Minister while flagging off the “National Validation on Data Protection Bill” workshop organised by the Nigeria Data Protection Bureau (NDPB) in collaboration with the Nigeria Digital Identification for Development (ID4D) said that as part of efforts to sustain the country’s digital economy growth, it was crucial to have legislation that would ensure data protection considering the amount of data being generated in the country daily.

He said, “We know the data generated today is mind-boggling and we must therefore have regulations in place to ensure confidentiality and privacy of data being generated”, he said.

Speaking about the journey so far on the implementation of the data protection bill, the minister said the the process began when he was the Director General of the National Information Technology Development Agency (NITDA) and the subsidiary legislation, Nigeria Data Protection Regulation (NDPR) was enacted on 29th January 2019 based on the provision of NITDA Act 2007.

While speaking with an utmost sense of modesty, Pantami revealed that unprecedented achievements have been made with the NDPR in the areas of creating awareness, job creation, and revenue generation for the government amongst many others.

He however noted that despite all the exploits made through the NDPR, it was necessary to have principal legislation to fully institutionalise data protection in the country, an initiative which birthed the establishment of the Nigeria Data Protection Bureau on the 4th of February 2022.

“In order to ensure privacy and confidentiality of our citizen’s data, the administration of His excellency and my principal, President Muhammadu Buhari approved the establishment of NDPB”, he mentioned.

Emphasising on the importance of data in any economy globally, Pantami stated that; big data analytics, datafication, internet of things just to mention a few of the innovations that come with the emergence of the fourth Industrial revolution are all dependent on data.

He hinted that the reason for developing and implementing the NDPR was to ensure that there was no vacuum while in the process of enacting the principal legislation of Nigeria’s data protection law.

“In the past three years in Nigeria, we discovered that the quantity of data being generated increased by 202%, so it is necessary that there are legislations in place to ensure that these data are secured, confidential and private”, he noted.

Speaking on the well-established statutory foundation of data protection in the country, Pantami made references to Section 37 of the 1999 Nigerian Constitution, Section 6 Article A of the NITDA Act, Sections 26 and 29 of the National Identity Management (NIMC) Act 2007, Section 3 of the Child Rights Act 2013 and Section 13 of the Freedom of Information (FOI) Act all who mentioned data protection within the provisions of their laws.

The Minister then thanked the legislative arm of government, development partners, Federal Ministry of Justice and all stakeholders for their support to the Bureau and the Ministry thus far in the process of actualising the enactment of the principal data protection legislation.

“It is necessary to organise this national discussion where we brought together the legislative arm of government, private sectors among others to review all we have been doing critically and if we agree based on what is recommended to me, it will be transmitted to the Federal Executive Council and thereafter if approved, transmitted to Mr. President and the National Assembly so that we can kick-start the process”, he concluded.