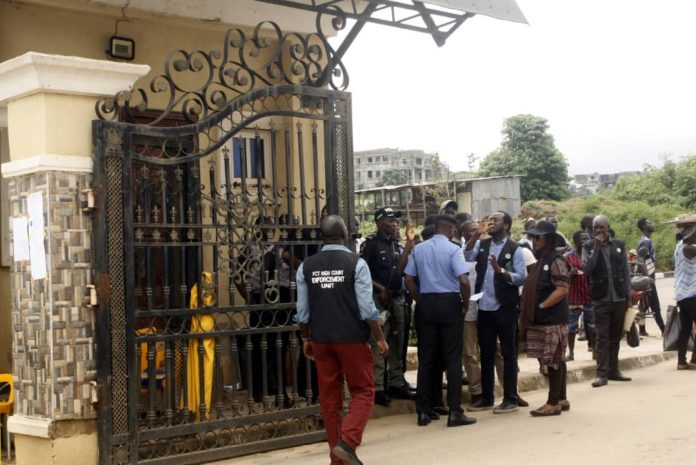 The FCT Police Commissioner, Mr Babaji Sunday on Thursday September 29 sent 20 policemen to enforce the Court of Appeal judgement that reinstated members of the ‘’Incorporated Trustees of Apo XK Extension Residents Association’’ titles to over 400 plots of land.

The policemen accompanied about seven bailiffs from the FCT High Court to serve the Court of Appeal enrolment order and the high court’s Warrant for Possession or the Writ of Possession to the current occupants of the land.

The bailiffs also pasted the court documents evicting current occupants at estate’s gate and on every nooks and corners their premises.

The Court of Appeal sitting in Abuja had on May 18, 2017 had set aside decision of the FCT High Court and declared the re-allocations of over 400 plots of land that constitute the Apo XK Lay-out by the Minister of the Federal Capital Territory and Federal Capital Development Authority to ENL Consortium Limited and Federal Housing Authority as illegal, null and void.

In the unanimous judgement delivered by Justices Mohammed Mustapha, Emmanuel Akomaye Agim and Tani Yusuf Hassan on May 18, 2017, ordered the FCT Minister, FCDA and ENL Consortium Limited to immediately halt the acts of trespass and to remove all machinery or personnel from the plots of land situated within XK Layout, Apo District which belongs to the appellants.

In the lead judgement read by Justice Mustapha, he said, ‘’having resolved all the issues that call for determination in this appeal against the respondents, this appeal succeeds and it is allowed, the judgement of the trial court is hereby set aside.

The Apo (XK) Extension Annex Layout was designed by the Federal Capital Development Authority and C-of –O issued to would be residents in 1995.But by April 2009, the Minister of Federal Capital Territory and FCDA began to demolish building s which were at various stages of development without giving reason for so doing or give any compensation.

On July 31, 2009, Justice O.O.Goodluck ordered the defendants from trespassing, encroaching on or interfering with plots XK Apo Extension Layout Annex, pending the determination of the substantive suit.

But on October 5, 2009, the then FCT Minister, now Senator Adamu Aliero authorize FCDA to allocate the over 200 plots covering 78 hectares that make up XK Apo Extension Layout Annex to the Federal Housing Authority (FHA)

However, FHA, FCDA and FCT disobeyed the court restraining order just as the ENL Consortium went ahead to be building estate houses on the plots.

But on May 27, 2011, Justice O.O. Goodluck of the FCT High Court delivered judgment in the matter. He dismissed the suit, and held that each allottee claiming occupation and allocation must establish their legal right on their plots. But the trial judge declared the title of the 5th respondent, Dr Tumala on the plot he owed as valid, awarded damages of N1 million also in his favour alone, against the ENL Consortium Limited, FHA, FCDA and FCT minister.

The appellants asked the Court of Appeal to declare they are the lawful allottees or occupants of the parcel of land known as ‘’Apo XK Layout situated within the FCT.

They asked the appellate court to hold that the trial judge err in law when he said that ‘’in praying for declaration of the title or lawful occupation, each allottee is a necessary party’’ thereby occasioning a miscarriage of justice.

The Appeal Court had held that the purported revocations of the titles of the plaintiffs to the land in dispute is illegal, and therefore void and ordered the Federal Housing Authority or their agents to abate the acts of trespass and remove all personnel or machinery from the land. It also awarded a N2 billion damages in favour of the appellants.

Meanwhile, the Federal Housing Authority had also on June 6, 2018 applied to the Supreme Court seeking for extension of time to seek leave to appeal against the judgement of the Court of Appeal’

However, the Federal Housing Authority had with regard to their application/appeal No. SC.613/2018 on March 1, 2022 applied for withdrawal of its application, and hence was struck out.

‘’It is ordered; that application filed on the 29th day of June, 2018 having been withdrawn is hereby struck out’’, Justice Ariwoola held.

Meanwhile, after the policemen and the court bailiffs have left the premises, the ENL Consortium and FHA officials mobilized over 50 touts with machetes to chase original allottees out of the premises.