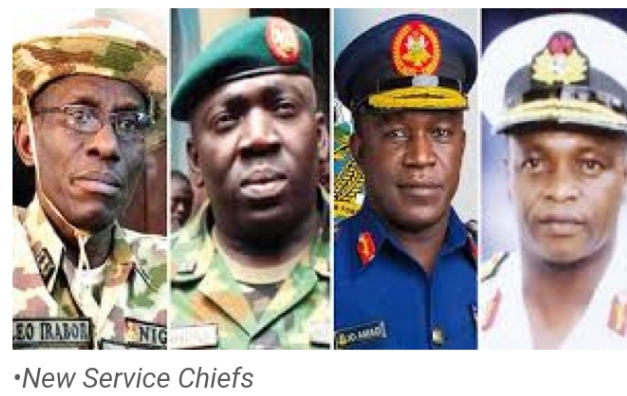 Over five years after their respective appointments, President Muhammadu Buhari, Tuesday, replaced the former Service Chiefs with a new set of officers. Long overdue, Nigerians welcomed the new set of Service Chiefs after an announcement came from the Presidency to that effect. Stella Enenche and Miriam Humbe, speak to some Nigerians as they set agenda for the newly appointed Service Chiefs.

They Must Be Professional, Avoid Human Rights Abuse

Considering the worsening state of insecurity across the country, occasioned by activities of Boko Haram terrorists, bandits, kidnappers and other non-state actors, I expect that the new Service Chiefs will carry out a total reorganisation at the tactical and operational levels of the ongoing counter-insurgency war in the North East. Nigerians expect them to hit the ground running with fresh ideas and perspectives on how to tackle adverse elements frontally. Also, they must give priority to the welfare of troops on the Frontline, especially through enhancement of their allowances, to reflect the sacrifices they make daily to protect the nation’s territorial integrity. Another area of focus should be issue of human rights’ abuse. We expect them to reiterate the rules of engagement to troops on internal security operations, while reminding them of consequences of non-adherence. The military must, as a matter of national importance, return to the enviable part of professionalism.

They Should Upgrade In IT, Maintain Dignity Of The Military

In a country where terrorist attacks have become very prevalent and palpable, a lot are to be expected from the new Service Chiefs:

Firstly, to completely annihilate and decimate Boko Haram and all appearance of terrorism. To take swift action and be proactive in tackling terrorism and insurgency. To upgrade in Information Technology and keep abreast with the fast moving societies. Learn from other developed countries who are more advanced in IT on how they have over the years managed theirs, (even though it could differ because the terrains are different). To restore the dignity of the military. This is very important because with the grapevine making the rounds, we hear of illicit activities being carried out by the military. Some are demeaning and dehumanizing. The present Service Chiefs are mandated to look into this and restore the long lost integrity. Finally, a change in tactics and intelligence is required. The obduracy shown by the insurgents and their constant attack and ability to hold sway on their conquered territories are clear indications that the past Service Chiefs are bereft of ideas. It behoves on the new ones to think deep and make consultations, bringing up something different in order to tackle this menace. We can’t be doing the same thing and be expecting a different result. With these issues being tackled thoroughly, the new Service Chiefs in the eyes of Nigerians would meet the people’s expectations.

I Pray For Their Success

We pray for them and hope that the patriotic spirit of our soldiers would be rekindled by this move to press further as we fight insurgency.

They Should Tighten The Loose Ends

First of all, its a good thing that the Service Chiefs have been changed. It’s been long clamored for, and we hope by re-jigging the security architecture of the country, new ideas can flow into securing Nigeria. My expectation is that, in those areas and aspects that the old ones have failed, those things that Nigerians have been clamouring for, we should begin to see changes. They should begin to tighten the loose ends, we should begin to see changes. Security should be tightened such that, all the kidnapping, killings and banditry around Nigeria would begin to actually subside and the promise which this present administration gave to us during their electioneering campaign,will begin to come to fruition. We don’t care where they are from. Personally, I don’t care where they are from. North, East, South or West. The most important thing is, are they performing, are they securing Nigeria? I want the Nigeria of old where I can enter my vehicle and say I am driving to Bauchi and not be afraid that I might be kidnapped or killed in Bauchi. That is the Nigeria of our dream and that is the Nigeria we need to go back to where schools will be secured. Anything short of this, I won’t be impressed!

They Should Purge The Bad Eggs To Restore Nigerians’ Confidence

It is my prayer and desire that peace is restored to enable normalcy return to all parts of the country. In achieving the desired peace, I expect the Service Chiefs to collaborate with the critical and relevant stakeholders in the security architecture to develop an all inclusive and over arching strategy that would address the different dimensions of the current security challenge while respecting their rule of engagement. The importance of professionalism can not be overemphasised considering public distrust of the military and this includes a conscious effort to strengthen the Nigerian Police to resume its primary role of maintaining internal security. It is pertinent equally to initiate a purge of the bad eggs in the military to restore the confidence of the Nigerian people.

They Should Defend The Nation From External Aggressors

I expect that they should work together to protect and defend the territorial integrity of the country from external aggressors who have become bandits, kidnappers and dare devil criminals. The Service Chiefs should not just become chiefs in paying lip service to the so-called exploits of the military, when in actual fact, little or nothing is being done and the country, instead, slips further into the abyss of insecurity, criminality and brigandage.

They Should Release A Timeline On Ending Insurgency, Terrorism

My expectations are that they need to overhaul all personnel  posted out to secure the country. They also need to check gun running business at border posts in order to curtail the influx of illegal small and light weapons in the country. Also organise seminars on insecurity across the country and also find ways of making youth surrender weapons to them. They need to work with all security agencies and vigilante groups as synergy to reduce crime in the country. They should also sponsor adverts on dangers of cultism in schools and also bring out a law against use of dangerous weapons. The Service Chiefs need to draw a work plan and bring out time line with target on when to end terrorism and insurgency in the country while working with the National Assembly on the dangers of using weapons to kill fellow citizens. Lastly they should study all the geographical zones in the country

They Should Be Fair To People Of All Ethnic Groups

Having sacked and appointed new service chiefs by the president, it is worth noting that the expectations from the old service chiefs were not achieved, possibly leading to the appointment of the new ones. Therefore there will/is high expectations from the new helmsmen by the public. My expectations as a democratic citizen of this Country are below;
The reformation of security in every state of the federation is paramount and imperative so as to handle the level of insecurity in our states. The Service Chiefs should cooperate with one another. That is, Army, Airforce and Navy working together to counter insecurity on the land, air and water. In as much as Nigeria is characterized by ethnic differences, they should carry out their duties adequately and for anybody that offend the law irrespective of ethnicity. As it is with every democratic society, they should have respect for the rule of law.

The change of guards in the Armed Forces which brought about the appointment of new Service Chiefs is a welcome development. This is long overdue and it sets a bad precedence. My expectations from the new Service Chiefs is for them to change the tactics. Our military are well trained and I know that they know the best way to end this madness called Boko Haram. I would like to see coordination from the office of the Chief of Defence Staff (CDS). He should be the commanding officer in which the COAS, CAF, CNS, report to. I want to see a more strategic tactical realignment where the military will take the fight to the enemy and not the other way round as it has hitherto been. I would like to see massive deployment of war equipment to the front line where our troops are served with brand new riffles. The government should leverage on the new US government and purchase new war equipment to prosecute this war to the finish. The military should stop advertising their strategy in the media but should advertise cogent results. This is war and there should not be any romance and pampering. Treat Boko Haram as enemy of the country and finish this war once and for all. The resources spent on prosecuting BH war should have been used to bring about development in the North-East but any development you put in the North-East now is a waste because it will be destroyed again if this war is not finished. I want to see an end to this war so that the government can cut down on military spending to channel the resources to health, education and agriculture.