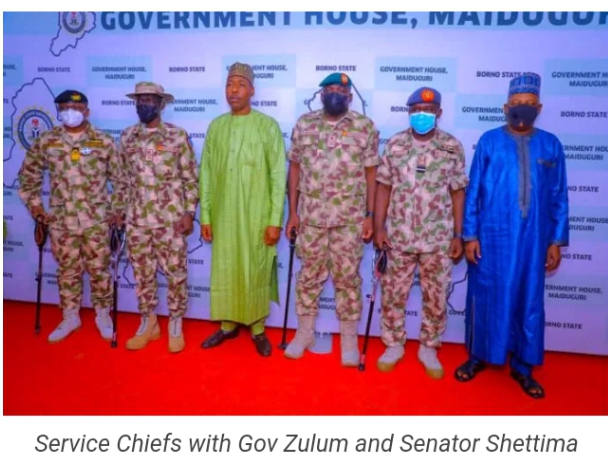 The newly appointed Service Chiefs, led by the Chief of Defence Staff (CDS), Maj. Gen. Lucky Irabor, have embarked on their first operational visit to the Theatre Command of the Counter-terrorism in Maiduguri, Borno State.

The CDS and his team, made up of the Chief of Army Staff, Major General Ibrahim Attahiru; Chief of Air Staff, Air Vice Marshal Isiaka Amao and the Chief of Naval Staff, Rear Admiral Awwal Gambo, were yesterday received by Major General Farouq Yahaya, Theatre Commander, Operation Lafiya Dole, Major General Abdul Khalifa, the General Officer Commanding, 7 Division of the Nigerian Army and other principal staff officers of the Military Command and Control Centre at the Headquarters of the Air Task Force.

At the Headquarters, the service chiefs were briefed by commanders on recent operations in the theatre, after which they paid a courtesy visit to Governor Babagana Zulum of Borno at the Government House, Maiduguri, where they also met with the former governor, Senator Kashim Shettima.

While addressing the service chiefs, Governor Zulum called for aggressive collaboration with armed forces in neighbouring countries of Chad, Cameroon and Niger Republic.

The Governor also sought enhanced ties between the military and civilian population to bridge trust deficit and increase military’s access to credible intelligence gathering which he said, was key to success in the fight against insurgency.

While assuring the military chiefs of his administration’s commitment and support to the armed forces by way of supplementing their efforts in the ongoing war, Zulum also urged the service chiefs to tolerate fair and constructive criticisms that might be made in good faith to enhance their productivity. 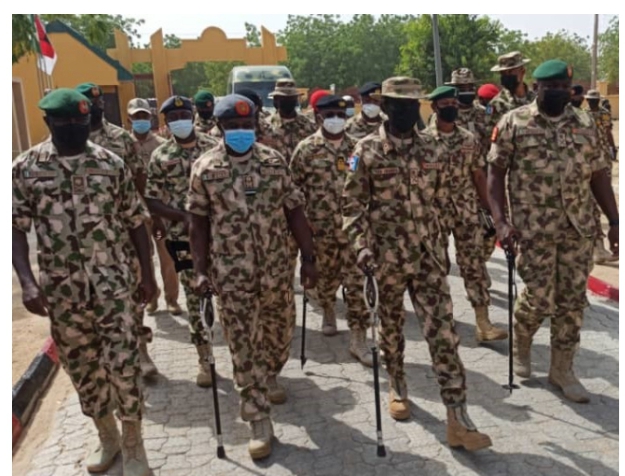 “In democratic settings, the military is an establishment which is subject to constructive criticisms by well-meaning citizens. Therefore, you are expected to accept such criticisms in good faith with a view to enhancing productivity in your operations”, Zulum said.

Governor Zulum emphasized the importance of robust coordination and collaboration between security operatives, particularly between the Nigerian Army (NA) and the Airforce if the Nigerian military is to achieve success. He also charged the military to ensure continued and sustained operations to deny insurgents breathing space, by blocking all routes to avoid terrorists moving from one region to another.

In his response, the CDS who led the delegation, gave assurances of a boost to military operations to end insurgency completely. He, however, craved the understanding of the civilian population in the fight against terrorism.

Justice Lewis Allagoa of the Federal High Court, Kano has convicted one Maryam Abu Shinga on one count amended charge of retention of proceeds...

Ziyech may not have received the same criticism during his maiden season at Chelsea as fellow new signings Timo Werner and Kai Havertz, but...

Eddie Howe Intrested In Celtic Job Former bournemouth coach who has been on sabbatical, is said to be intrested in the vacant celtic manager’s job. The...

Stella Enenche, Abuja The Christian Association of Nigeria (CAN) has accused President Muhammadu Buhari of backing the position of a popular Islamic scholar, Sheik Ahmad...

The House of Representatives has called for improved welfare for troops and effective delivery of welfare packages across the ranks. The Lawmakers took this position...