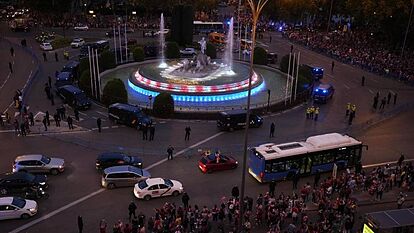 A tragic event has taken place in the centre of Madrid, as a 14-year-old fan has reportedly lost his life during Atletico Madrid’s title celebrations.

Thousands of fans took to the streets of the Spanish capital after Atletico came back to beat Real Valladolid 2-1 on Saturday, as they mathematically clinched the LaLiga Santander trophy.

According to El Pais, the youngster was sat with his body out the window outside the van in which he was travelling and he hit his head at the entrance of a car park at the Plaza de Santa Ana.

The van carried several young people whose bodies were also outside the vehicle, with driver having knocked down several construction fences before entering the car park where the accident occurred.

Ambulances arrived at the area but couldn’t provide any help and confirmed the 14-year-old’s tragic death. (marca.com)